Because The LEGO Company get paranoid about this sort of thing let me make it clear that I have no affiliation with them, that my views are my own and do not necessarily represent theirs, and so on. So if you think any of this is official you are as deluded as they are. 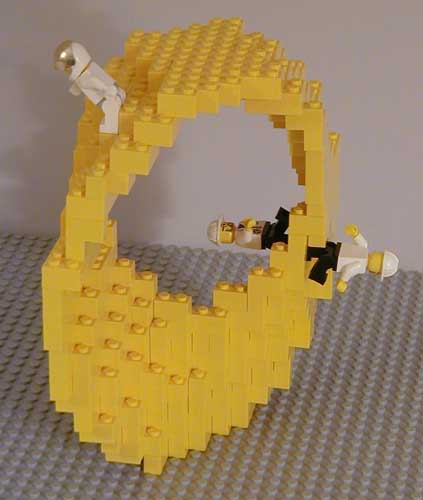 OK, I admit it - these weren't constructed entirely without computer assistance. Usually I write some C code to generate whatever the shape is and figure out which cells in a grid made up of 1x1x1 LEGO bricks should be filled in. The code outputs this as an LDraw .DAT file, separated into construction steps adding one complete layer of the structure in each step. Then I use MLCad to view the .DAT file. I play around with the parameters and repeat until I have something that looks nice and which will probably be able to balance.

But that's the easy part.

Now I have to try to construct it out of actual LEGO bricks so that it actually holds together. Worse, I have to use the collection of bricks actually in my possession and not currently in use in some other construction [in case anyone's interested, I've convinced myself that this is, in general, an NP-hard problem. One of these days I'll write up the proof]. This usually takes far longer than the first stage - and a few times I've had to give up. Occasionally I cheat just a teeny bit and deviate from the output of my code in order to help the structure hold together.

I used to be able to say that all the models shown on this page were constructed using only the 1xN and 2xN standard bricks you can find in the blue bulk tubs. No plates, no L-shapes. That was until I built the Costa surface. I just couldn't make it hold together with bricks alone, so I gave in and used a few small plates too.

And after these, all I can say is... the sooner The LEGO Group starts selling bulk packs of 1x3 bricks the better :-)

When I get round to it, I'll add something here on the actual mathematics. For the moment, here are some pictures. Marvel at the wasted hours.... Click on the thumbnails to see more (and larger) pictures

LEGO ® is a trademark of The LEGO Group, who have nothing to do with this or any of my other LEGO-related web pages.

Selected as Cool Math Site of the Week, 9th May 2002 by Knot a Braid of Links

Selected as Link of the day for 29th May 2002 by userfriendly.org